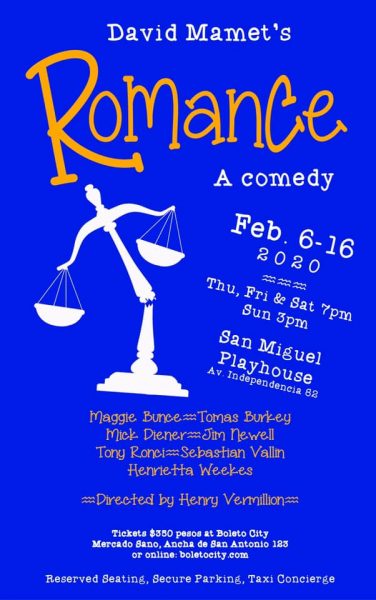 The courtroom drama has been a staple of the theater for centuries, but Pulitzer Prize-winner David Mamet turns the genre on its head in Romance, a rollicking send-up of hypocrisy and humbug in all its guises. Mamet exposes the disconnect between the way people uphold their respectable jobs — as judges, doctors, attorneys, clergy, and so forth — while their puerile prejudices and peccadilloes are screaming for release. The plot, such as it is, involves a defense attorney’s attempt to get an acquittal for his guilty client, in the courtroom of a judge high on allergy meds, by working out a solution for World Peace based on the defendant’s skills a chiropractor. Really.

In her review of the play for Let’s Talk Off-Broadway, critic Yvonne Korshak writes: “Romance is one of the funniest plays I’ve ever seen. It’s wicked, nasty, but totally non-stop hilarious…. This is one skillful playwright: a ‘nice’ person can happily laugh and laugh at Mamet’s incredibly open and nasty attacks on, say, Judges or Jews because Mamet isn’t prejudiced — he attacks everyone.”

The San Miguel Playhouse production of Romance stars Jim Newell as the Judge, Mick Diener as the Prosecutor, Maggie Bunce as the Defense Attorney, Tomas Burkey as the Defendant, Tony Ronci as the Bailiff, Sebastian Vallin as Bernard, and Henrietta Weekes as the Doctor. The show is directed by Henry Vermillion.

See it if you dare!

Click on the shows of your choice to purchase tickets.
All prices in Mexican pesos.

See it if you dare!